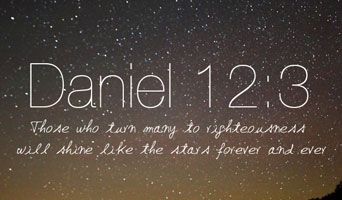 Four young men were thrown into a fiery furnace because they chose not to bow down to anyone other than God. Daniel and his friends chose to obey God rather than man, because He was worth it ALL, including their very lives. It is this theme that most Christians would acknowledge as the main "take-away" of this book. However, I think it is equally important to draw attention to the One who gave Daniel, Shadrach, Meshach and Abednego the very strength to perform such an act. As a matter of fact, King Nebuchadnezzar missed this very principle in contemplating the vast greatness of his kingdom. He had built a statue in honor of himself, commanded the people to worship it and was so bold as to remark, "Is not this great Babylon, which I have built by my mighty power as a royal residence and for the glory of my majesty?” (Daniel 4:30). And while most believers would not be so bold as to even whisper such haughty words, our actions may oft be reminiscent of that which brought about this great king's downfall, especially as it relates to the Lords Day.

In 1985, John Piper wrote about the importance of the Lord’s Day. An excerpt of his blog follows:

This is the real basis of his hallowing and blessing the day of rest. He is saying in effect, "Let my highest creature, the one in my image, stop every seven days and commemorate with me the fact that I am the creator who has done all this. Let him stop working and focus on me, that I am the source of all that he has. I am the fountain of blessing. I have made the very hands and mind with which he works. Let one day out of seven demonstrate that all land and all animals and all raw materials and all breath and strength and thought and emotion and everything come from me. Let man look to me in leisure one day out of seven for the blessing that is so elusive in the affairs of this world."

To read the full bog, click here. Remember, one's actions speak much louder than words. Let us speak and live today in such a way that others may see that He is truly worth it ALL.